As part of the men’s Future Tours Programme, the Pakistan Cricket Board (PCB) announced Wednesday the ten Test-playing nations that will come to Pakistan between 2023 and 2027. The PCB has scheduled 27 ICC World Test Championship matches (13 at home and 14 on the road), 47 one-day internationals (26 at home and 21 on the road), and 56 Twenty20 Internationals. About 238 days of international cricket will be played over the next four years (27 home and 29 away). Read out the complete details about PCB men’s Future Tours 2023-2027.

The Future Tours Programme is made by people who are part of the International Cricket Council working together. So, the PCB will continue to work with its other Members, and more matches and series may be added if there is a good time for international cricket and enough players who want to play. In the ICC World Test Championship from 2023 to 2025, Pakistan will play Australia (away), Bangladesh (home), England (home), South Africa (out), Sri Lanka (out), and West Indies (home). From 2025 to 2027, they will play Bangladesh (away), England (home), New Zealand (home), South Africa (home), and Sri Lanka (home) (out). Pakistan will host all three countries in a One-Day International series for the first time since 2004-05.

In 2025, Pakistan will host a tri-series with New Zealand and South Africa before the ICC Champions Trophy. In 2026, England and Sri Lanka will join in for a similar series in October and November. The PCB has planned its white-ball tournaments around the international games held by the ICC. The ICC Men’s T20 World Cup will be held in the United States and the West Indies in 2024.

Pakistan will host the Asia Cup in 2023 and a triangular series in February 2025 to prepare for the ICC Men’s Cricket World Cup in 2023 and the ICC Champions Trophy in 2025. In the same way, Pakistan will host three Twenty20 Internationals against Australia before India and Sri Lanka host the ICC Men’s T20 World Cup 2026. Four teams, including Australia, Afghanistan, Ireland, and Zimbabwe, will play white-ball matches in Pakistan between 2023 and 2027. Pakistan’s FTP 2023-2027 shows that it will host ten of the twelve ICC Full Member nations for the first time in more than 20 years. 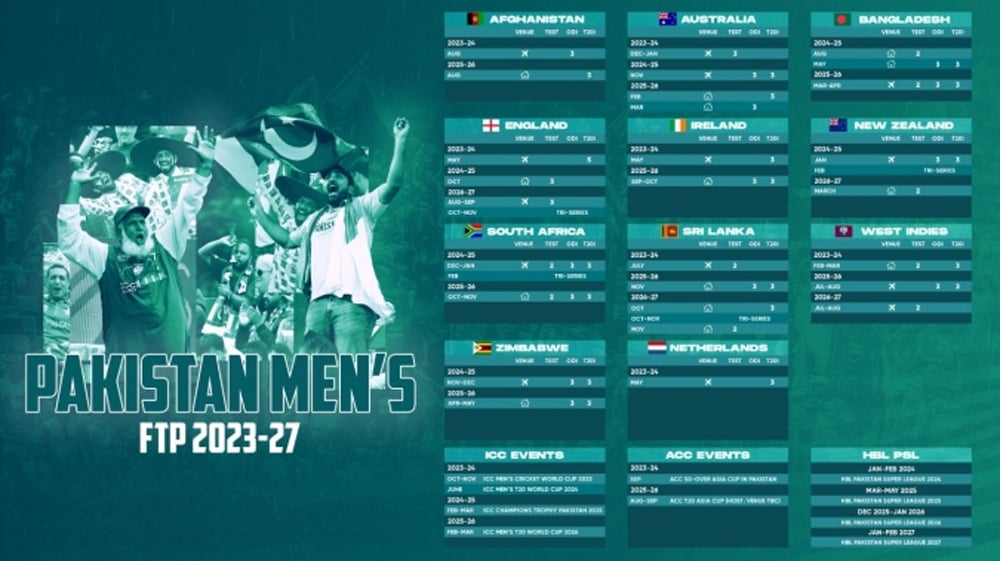