Pakistan cricket team all-rounder Shoaib Malik missed the third and final match of the T20 series against Bangladesh due to his son’s illness. He later returned to Dubai from Dhaka. In a statement, the Pakistan Cricket Board confirmed Shoaib’s unavailability. Saying he would not be available for the third T20 match due to his son’s mental illness.

According to the PCB, Shoaib Malik will leave for Dubai at 10 am local time. The last match of the T20 match series against Bangladesh will be played at the Sher-e-Bengal Stadium in Dhaka at 1:00 pm local time.

On the other hand, Sania Mirza, while sharing her video in a short post, wrote:

“When your son is sick and has got 2 hours of sleep.”

The national T20 squad will leave Dhaka tomorrow. He will return to Pakistan via Dubai after the end of the T20 series. However, spinners Emad Wasim and Usman Qadir will stay in Dubai with their families for a few days. 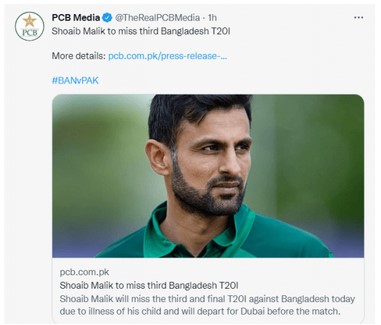 The Test squad will leave Dhaka for Chittagong at 3 pm today. The first Test between Pakistan and Bangladesh will be played on November 26 and the last on December 4. National team bowling consultant Vernon Flanders will leave the squad after the first match and will leave for South Africa on December 1.