Read out the exclusive details and updates about Karachi Kings wins by 22 runs in KK vs LQ PSL 7 down below with us! 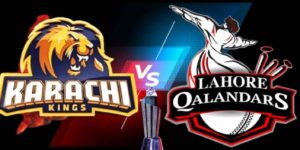