Global Zalmi team wins European Cricket Series is news of the day. Read out the complete details down below with us!

It was announced on Monday by the Peshawar Zalmi publicity department that Pakistani cricketers gave honour to their country. Thus the Zalmi family by winning the European Cricket Series title with Alby Zalmi, an international division of Pakistani descent. In light of the triumph, the statement was drafted. Alby Zalmi defeated Bo Trika Club by a score of 20 runs in the final match in Stockholm, Sweden.

According to a press release, this is the case. Thus, In the championship game, Alby Zalmi batted first and scored 94 runs while losing four wickets despite the rain delay. Ismail Zia (39 runs) and Raheel Khan (43 runs) were the standouts in the batting order (20 runs). In addition to his hat trick, Mir Afzal took four key wickets in a game-winning performance. Alby Zalmi has moved to the next round of the European Cricket League series after an amazing run of eight victories in a row. Also, the President of Peshawar Zalmi, Javed Afridi, congratulated Alby Zalmi on behalf of Peshawar Zalmi on his team’s amazing success, saying that it gave honour to Pakistan and to the Zalmi family all around the world. 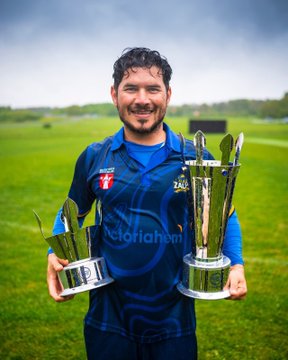