Afghan defeats Scotland has taken the internet by storm. Also, the Afghans are being congratulated by their fans and the Taliban also. Read out the complete details down below with us!

In a recent match between Afghanistan and Scotland, Afghans got a lead with a handsome number of wickets and runs. Therefore, they won the match against Scotland for the T20 World Cup Cricket Match, 17 of 45. Now everybody in Afghanistan is very happy over this thrilling match. Both teams will fight for the biggest tournament, ICC Men’s T20 Worldcup 2021-22, much harder now. Thus, they are geared up for this exciting tournament’s upcoming matches. Also, all their fans are truly happy over the victory of the afghans.

Afghan defeats Scotland has taken the internet by storm. Also, the Afghans are being congratulated by their fans and the Taliban also.

“Congratulations to all Afghans on the victory of the Afghan team in the ongoing World Twenty20, Mujahid wrote on Twitter. “Wish them more success in the future.”

“They said they support cricket and are fully behind the development of the game.” 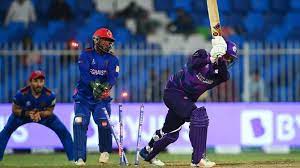