Readout the complete details about 1400 climbers will conquer Pakistani peaks.

This year, the sky-touching peaks and snow-covered mountains of Pakistan attracted over 1,400 climbers and trekkers from around the world. The secretary of the Alpine Club of Pakistan, Karrar Haider, says that this is the most Pakistani mountain climbers in recent history. At least 370 climbers are attempting to reach the top of K2. The second-highest peak in the world at 8,611 metres. The Gilgit-Baltistan government have awarded 700 climbing licences for over 20 summits. It includes but not limited to K2, The Broad Peak, Nanga Parbat, Gasherbrum 1, Gasherbrum 2, and Trango Towers.

In addition to Pakistan, mountaineers from Saudi Arabia, Japan, Russia, Norway, Italy, Saudi Arabia, Bangladesh, Iran, and the United States are already in the nation. Many of them have already reached base camp and plan to move on to camp 1 on their own summits. Shehroze Kashif, a Pakistani mountaineer who aims to be the youngest person to summit all 14 8,000-meter peaks, has climbed Nanga Parbat. Wednesday evening, according to Shahroze’s crew, the mountaineer from Lahore arrived at base camp. But the forecast for the weather is not good. After four days, he is anticipated to encounter weather issues that would halt his progress for a week. Shahroze also intends to summit Gasherbrum 1 and Gasherbrum 2 following the ascent of Nanga Parbat.

Two Pakistani female mountaineers, Naila Kiani and Samina Baig, are en route to K2. In addition to Sirbaz Khan, Wajid Nagri, Sajid Sadpara, and Abdul Joshi are attempting K2, while Sirbaz Khan will climb Gasherbrum 1. In the meantime, female climbers from Iran, Bangladesh, and Saudi Arabia are also attempting to reach the peak of K2. Afsaneh Hesamifard of Iran, who had already scaled Everest and Manaslu, climbed Cho Oyu. 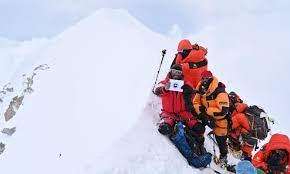